How to create fountain animation in 3DS MAX? How to move the flow of water ? How to animate a backlight of water?

Watch the video and learn the answers to these questions.

Here is an animation, you need to get:

Using VRay and other rendering software

FTools.script is fully compatible with the scanline renderer only. However, it is very easy to combine it with any other renderer.

To do this, first you need to visualize the surroundings using your favorite renderer, and then use the result as a background. There are no restrictions. You can use not only a static image as a background, but a sequence of frames. Animated background and a camera, that is… 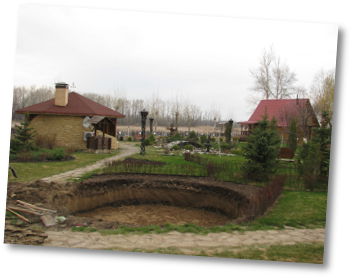 Please note that we use a photo in this tutorial. That is, basically it does not matter what render you use and what picture you use as the background.

The process of background preparation

A zipped file attached to the tutorial on dynamic fountain animation contains images that we will use as the background.

In order to get them, we must first process the image. Trim it in the desired proportions. Create day-time and night-time versions of the image.

Then load the picture into the scene with a fountain. Set up the camera so that the virtual camera view point coincided with the point of view of a real camera.

Render the fountain over the image. In our case we made two visualizations. Day-time and night-time.

Visualization of the background in a sequence of frames

It is very easy to render the water ripples animation over the picture. It adds realism to our animation.

Download the zipped file attached to the tutorial and open the scene titled FTools.script-BG.max. This scene contains the fountain visualization over the photo from the previous step. 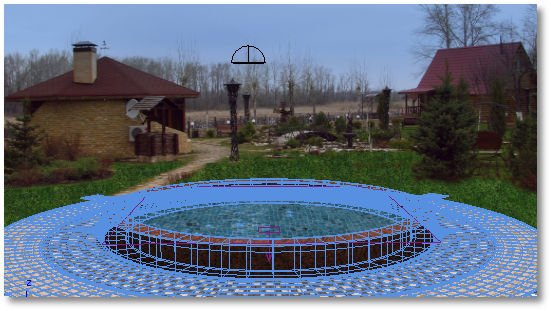 Please note that in this scene a rendered fountain is used as the background, over the photo. In this case, all of the objects are applied Matte / Shadow material, except for the water. For water we use a special reflecting material that plays in the sun.

Look into the properties of the Matte / Shadow material. This material will be very useful in your work.

Specify the directory in which you want to save your frame sequence. Specify the frame extension so that it is the same size as the final animation. You can use a jpg file with minimal compression as the format.

In the next step we are going to configure the Matte / Shadow material in such a way that the water surface did not only have ripples and reflections, but also the reflection of our future water pictures.

After an animated background is rendered, configure Matte / Shadow material for the water surface. If we leave as it is, then our nozzles won’t be reflected on the surface. 3DS MAX has a tool which allows simulating such reflections.

Open a scene titled FTools.script-WaterPatterns.max. A frame sequence is used as a background (it is not attached to the tutorial so that you didn’t have to download big-size files). We use a Matte/Shadow materialas the material of the water surface. 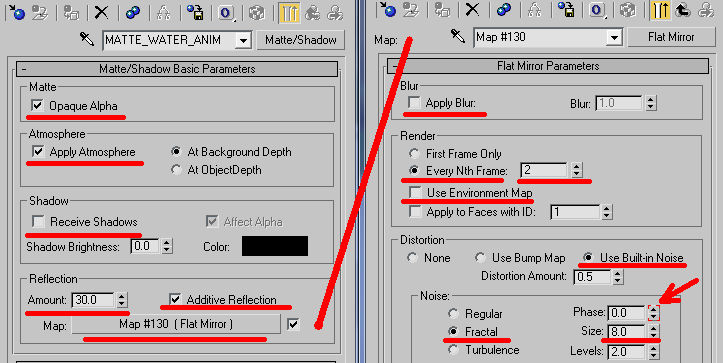 If we place any object on the water surface, there will be reflections of it.

Now you are ready to create a water picture of the fountain. Make sure that the number of frames is properly configured. If you change this value later, you will have to re-adjust the height of the jets and their animation, respectively. This example uses 25 frames per second.

Creating and configuring water images of a fountain

FTools.script allows automating the process of fountain water images creating. Here are the pictures of water which we will make in this tutorial:

Once the scene and water images are ready, you can proceed to fountain animation. This example shows how to make animation of a dynamic fountain using FTools.script.